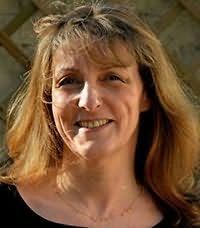 A pseudonym used by Julie Caplin
Jules' earliest known declaration that she planned to be a writer came at the age of ten.

Along the way she was diverted by the glamorous world of PR and worked on many luxury brands, taking journalists on press trips to awful places like Turin, Milan, Geneva, Paris, Brussels and Amsterdam and occasionally losing the odd member of the press in an airport. It gave her the opportunity to eat amazing food, drink free alcohol as well as providing opportunities to hone her writing skills on press releases and to research European cities for her books.

Eventually the voices in her head persuaded her it was time to sit down and write the novel she'd always talked about. Her debut novel, Talk to Me in 2014, was quickly followed by the best selling From Italy With Love, published by HarperImpulse which reached the top ten in the Amazon Kindle charts.

The Juniper Gin Joint (2018)
Lizzie Lovell
"Like a complex gin, brimming with botanicals, this delicious book offers a giant swig of a story full of characters, wit and warmth."