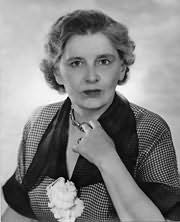 (1892 - 1983)
Cicely Isabel Fairfield, known by her pen name Rebecca West, or Dame Rebecca West, DBE was an English author, journalist, literary critic and travel writer. A prolific, protean author who wrote in many genres, West was committed to feminist and liberal principles and was one of the foremost public intellectuals of the twentieth century. She reviewed books for The Times, the New York Herald Tribune, the Sunday Telegraph, and the New Republic, and she was a correspondent for The Bookman. Her major works include Black Lamb and Grey Falcon (1941), on the history and culture of Yugoslavia; A Train of Powder (1955), her coverage of the Nuremberg trials, published originally in The New Yorker; The Meaning of Treason, later The New Meaning of Treason, a study of World War II and Communist traitors; The Return of the Soldier, a modernist World War I novel; and the "Aubrey trilogy" of autobiographical novels, The Fountain Overflows, This Real Night, and Cousin Rosamund. Time called her "indisputably the world's number one woman writer" in 1947. She was made CBE in 1949, and DBE in 1959, in recognition of her outstanding contributions to British letters.
Series
Cousin Rosamund Trilogy
1. The Fountain Overflows (1956)
2. This Real Night (1984)
3. Cousin Rosamund (1985)

The Delicate Fire (1933)
Naomi Mitchison
"It is a rich piece of work, rich in thought, rich in feeling and digging deep into the essentials of human existence. We realize not for the first time, that Mrs. Mitchison stands head and shoulders above the writers of her generation, not only in this country."