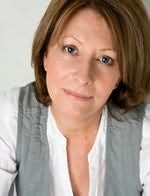 (b.1959)
Born in rural Lincolnshire in 1959, Anne moved to South Yorkshire at the age of two. Following her education at Sheffield High School for Girls, she went into the IT industry, a career which took her to both New York's Wall Street and Denver, Colorado. In America she began to take seriously her ambition to write fiction, and bought a typewriter for her first short stories.

On returning to the UK, she booked a summer holiday with her sister. The location they chose was a tiny island in southern Greece.Anne spent a number of years living in the islands; she married a Greek, and her son was born there.

Returning again to the UK, she was still writing, but the short stories had grown into novels.Anne currently lives with her son in Derbyshire's beautiful Peak District, where she's working on the next book in the Greek Detective series.