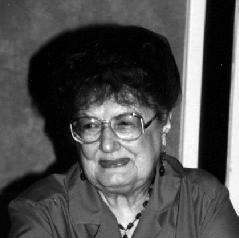 aka Andrew North
For well over a half century, Andre Norton has been one of the most popular science fiction and fantasy authors in the world. Since her first SF novels were published in the 1940s, her adventure SF has enthralled readers young and old. With series such as Time Traders, Solar Queen, Forerunner, Beast Master, Crosstime, and Janus, as well as many stand-alone novels, her tales of action and adventure throughout the galaxy have drawn countless readers to science fiction.

Her fantasy, including the best-selling Witch World series, her "Magic" series, and many other unrelated novels, has been popular with readers for decades. Lauded as a Grand Master by the Science Fiction Writers of America, she is the recipient of a Life Achievement Award from the World Fantasy Convention. Not only have her books been enormously popular; she also has inspired several generations of SF and fantasy writers, especially many talented women writers who have followed in her footsteps. In the past two decades she has worked with other writers on a number of novels. Most notable among these are collaborations with Mercedes Lackey, the Halfblood Chronicles, as well as collaborations with A C Crispin (in the Witch World series) and Sherwood Smith (in the Time Traders and Solar Queen series).

Andre Norton died on thursday 17 March 2005 at her home in Murfreesboro, Tennessee.

Too Many Magicians (1966)
(Lord Darcy, book 2)
Randall Garrett
"A cannot count the number of times I have read TOO MANY MAGICIANS - each time with the same pleasure."

Daggerspell (1986)
(Deverry, book 1)
Katharine Kerr
"One of the best sword and sorcery novels I have read in some time."

Crota (1996)
Owl Goingback
"One of the best un-put-downable novels that has passed through my hands in a long time. Goingback has excelled. Excitement on every page."

Obsidian Butterfly (2000)
(Anita Blake, Vampire Hunter, book 9)
Laurell K Hamilton
"...a departure from the usual type of vampire tale which will have a wide appeal to any reader hunting for both chills and fun."

The Lesser Kindred (2000)
(Song in the Silence, book 2)
Elizabeth Kerner
"Not since Elizabeth Moon's valiant Pak has a heroine of such status, physical and moral, stormed onto the stage of fantasy."

Wings of Morning (2005)
Katharine Eliska Kimbriel
"I want to thank you very much for introducing me to your world."