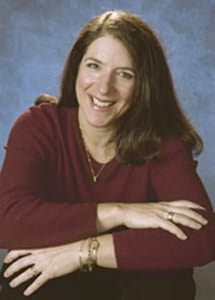 aka Ariel Berk, Thea Frederick
Barbara Keiler was born on April 7th. She started telling stories before shecould write. She was four when her sister, Carolyn, stuffed a crayon intoher hand and taught her the alphabet, and she's been writing ever since.

Barbara is a graduate of Smith College, where she learned to aim for thestars, and she received a master's degree in creative writing from BrownUniversity, where she took aim at a good-looking graduate student in thechemistry department and wound up marrying him. She says: "Before myhusband and I were married, I had a job in California and he was working onhis Ph.D. in Rhode Island. I became ill, and he hopped on a plane and flewacross the country to be with me. Neither of us had any money, but he saidhe simply couldn't concentrate on his research, knowing I was three thousandmiles away and facing a serious health problem all by myself. He stayed fortwo weeks, until I was pretty well recovered. That he would just drop whathe was doing, put his life on hold and race to my side told me how much heloved me. After that, I knew this was the man I wanted to marry."

Barbara has received writing fellowships from the Shubert Foundation and theNational Endowment for the Arts, and has taught at colleges and universitiesaround the country. She has also written several plays that have beenprofessionally staged at regional theaters in San Francisco, Washington, D.C.,Connecticut and off-off-Broadway.

Since her first romance novel's publication in 1983 as Ariel Berk. Shewrote one novel as Thea Frederick, and since 1985 she writes asJudith Arnold. Barbara has sold more than 70 novels, with eight millioncopies in print worldwide. She has recently signed a contract with MIRABooks. Her first MIRA novel will appear in 2001. She has received severalawards from Romantic Times Magazine, including awards for the Best HarlequinAmerican Romance of the Year, Best Harlequin Superromance of the Year, BestSeries Romantic Novel of the Year and a Lifetime Achievement Certificate ofMerit for Innovative Series Romance. She has also been a finalist for theGolden Medallion Award and the RITA Award for Romance Writer of America. Hernovel Barefoot in the Grass has appeared on the recommended reading listsdistributed by cancer support services at several hospitals.

Barbara lives in a small town not far from Boston, Massachusetts, NewEngland with her husband, two teenage sons, and a guinea pig named Wilbur.Her sister Carolyn died of breast cancer in 1998.