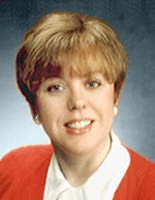 Kate Hoffmann majored in music in college. Later she settled into a job teaching elementary school children about quarter notes and treble clefs.Kate began reading romance in 1979 when she picked up a copy of Kathleen Woodiwiss's Ashes in the Wind. She read the book from cover to cover in onevery long night and was immediately hooked on the genre. The next morning,she was standing at the door to her local Waldenbooks and when they opened,she hurried inside and asked for everything else written by Woodiwiss. Atthe same time, she found wonderful books by Rosemary Rogers, Laurie McBain,and Jennifer Blake.

Nearly 10 years later, while working as an advertising copywriter, Katedecided to try writing a romance of her own. After a history of interestingjobs in teaching, retailing, advertising, and nonprofit work, she wasdetermined to add romance author to that list. After numerous failedattempts over three years, Kate decided to forget writing historical romanceand turned to category romance. Six months later, her first story, AVagabond Heart, was finished. A year later, Harlequin bought the book afterKate won the national 1992 Harlequin Temptation contest. The book waspublished in 1993 as Indecent Exposure. Her dream of adding romance writerto her resume came true and in December of 1993 she turned off her alarmclock, shredded her pantyhose, and became a full-time writer. Since then,Kate has written numerous books for Temptation, Weddings by DeWilde,Harlequin anthologies, Love and Laughter, and Duets.

Kate lives in southeastern Wisconsin in a cozy little house in a picturesquevillage. Two cats also live with her -- Tansing, a grumpy Himalayan, andTibriz, a tortie Persian mix that she rescued from an animal shelter. Sheenjoys gardening, golf, reading, and romantic movies.