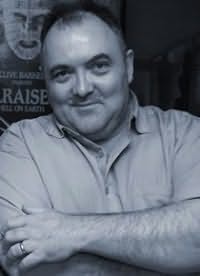 (b.1955)
Peter Atkins is one of genre writings lesser-known gems. If his name is familiar, its most likely in connection with another famous Liverpudlian writer, Clive Barker. The two are, in fact, very good friends, plus Atkins was responsible for the Hellraiser II, III and IV scripts, a continuation of the Barker-directed Hellraiser film (itself based on his own novella The Hellbound Heart). This association is not entirely a surprise, as the two writers share a similar sensibility of brilliant invention, a love of the fantastique and a poetic lyricism as well as a hometown. At times its almost possible to believe that theyre literary twins who were separated at birth. This should not be taken to imply that Atkins doesn't possess his own unique voice. If anything, the spectrum of work shown off here is broader and his palette more lyrical than Barker's, veering away from the latters visceral oeuvre, but nevertheless possessing the same power and majesty, as well as being marked with a uniquely Atkinsonian literary voice.

Novellas
The Return of Boy Justice (2016)