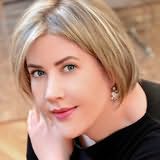 aka Katie Gallagher
Sarah Addison Allen grew up in the beautiful mountains of western North Carolina, where her mother still makes cornbread that is out of this world and her father plays old-timey banjo, claw-hammer style. Neither of these talents were passed on to Sarah, but she did become very good at eating and listening. The former made her fond of elastic waistbands, the latter turned her into a writer.

Sarah has her B.A. in Literature and her first book, the romantic comedy Tried and True, written under the pen name Katie Gallagher, was published by Harlequin Duets. It was nominated by The Romantic Times for both Best First Book and Best Duets of 2003. Sarah's mainstream debut, Garden Spells, a quirky book of Southern-fried magical realism, was published by Bantam Dell in the Fall of 2007.