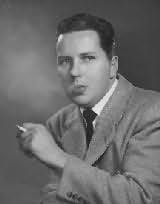 aka Ben Kerr, Mike Moran, Jonas Ward, Thomas Wills
William Ard has been one of the most elusive writers in the collecting world.

Odd for a man who was one of the most popular hardboiled writers of the 1950s. He was praised by critics from the St. Louis Dispatch to the New York Times.

Few imagined the dark side of the city and the entertainment business better than William Ard. When he turned his gaze west, he gave life to one of the genre's most enduring heroes.

Today his name is all but forgotten. His hardboiled titles are scarce. His paperback titles in fine condition are nearly impossible to find.

While he went by many names, he is essentially a man of two faces. Ard was the creator of hard-hitting detective Timothy Dane of New York and an even harder living and loving detective, Lou Largo, of Florida.