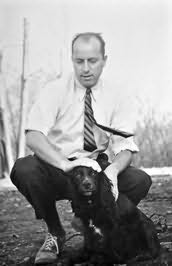 aka John Gonzales, Brett Halliday, Robert Kyle
Under his own name and the pseudonyms "Robert Kyle" and "John Gonzalez," Robert Terrall wrote many popular and well-reviewed crime novels, including the prescient 1948 classic A Killer Is Loose Among Us, about a biological weapons lab developing weaponized anthrax for use in a terrorist attack. He is best known, however, for his comic work, including the Ben Gates series that began with Blackmail, Inc. in 1958 and included Kill Now, Pay Later. After the creator of detective Mike Shayne, Davis Dresser, stopped writing novels as "Brett Halliday," Terrall also took over these duties, turning out more than two dozen Mike Shayne novels under the Halliday name.