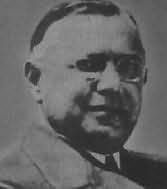 (1884 - 1933)
Earl Derr Biggers was born in Warren, Ohio on August 24, 1884. Years later, while attending Harvard University, Biggers showed little passion for the classics, preferring instead writers such as Rudyard Kipling and Richard Harding Davis. Following his graduation from Harvard in 1907, he worked briefly for the Cleveland Plain Dealer and at Bobbs-Merrill publishers. By 1908, Biggers was hired at the Boston Traveler to write a daily humor column. Soon, however, he became that paper's drama critic. It was at this time that he met Elanor Ladd, who would later become his wife and who would have a marked influence in his writing.