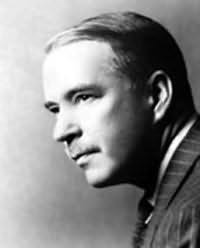 (1893 - 1960)
Raised by his aunts, Marquand was educated at Harvard University on a scholarship. His early interest in writing led to an editorial position on the Harvard Lampoon where he honed his journalistic skills. After graduation in 1915, he took a reporter job with the Boston Evening Transcript, where he worked until his military unit was activated and sent to the Mexican border in 1916. From 1920 to 1921, he worked as an advertising copywriter before publishing his first novel, The Unspeakable Gentleman, in 1922. He became a regular contributor to major magazines such as The Saturday Evening Post, Cosmopolitans, Collier's and Good Housekeeping. He married Christina Sedgwick in 1922, a niece of the editor of Atlantic Monthly. During the 1930's, Marquand became one of America's most popular and successful authors and in 1937 published The Late George Apley, a pseudo-biography and satirical exploration of Boston society. The book won him the Pulitzer Prize in 1938. He is also remembered for the creation of the oriental spy and detective, Mr. Moto, who appeared in a host of works and eight Hollywood films.

Non fiction
A Pickle for the Knowing Ones (1959)