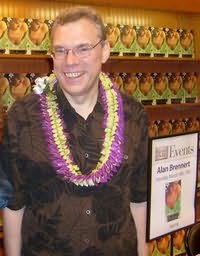 (b.1954)
Alan Brennert is the author of Honolulu and Moloka’i, which was a 2006-2007 BookSense Reading Group Pick and won the 2006 Bookies Award, sponsored by the Contra Costa Library, for the Book Club Book of the Year. In addition to novels, he has written short stories, teleplays, screenplays, and the libretto of a stage musical, Weird Romance. He won an Emmy Award and a People’s Choice Award for his work as a writer-producer on the television series L.A. Law, and he has been nominated for a Golden Globe Award and for the Writers Guild of America Award for Outstanding Teleplay of the Year. His story “MaQui” won a Nebula Award. He lives in Sherman Oaks, California, but his heart is in Hawai’i.

Graphic Novels
Tales of the Batman (2016)