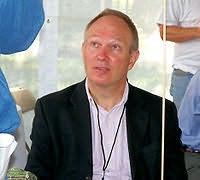 (b.1951)
Ian Buruma (born December 28, 1951) is an Anglo-Dutch writer and academic. Much of his work focuses on Asian culture, particularly that of 20th-century Japan.

He was born in The Hague, the Netherlands, to a Dutch father and English mother. He studied Chinese literature at Leiden University, and then Japanese film at Nihon University in Tokyo. He has held a number of editorial and academic positions, and has contributed numerous articles to the New York Review of Books. He was been noted as a "well-regarded European intellectual."

In 2008 Buruma was awarded the Erasmus Prize, which is awarded to an individual who has made "an especially important contribution to culture, society or social science in Europe."
Novels
Playing the Game (1991)
The China Lover (2008)