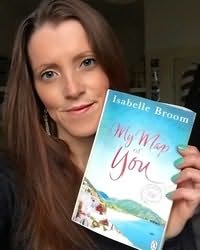 Isabelle Broom was born in Cambridge nine days before the 1980s began and studied Media Arts at the University of West London before starting a career first in local newspapers and then as a junior sub-editor at heat magazine. She travelled through Europe during her gap year and went to live on the Greek island of Zakynthos for an unforgettable and life-shaping six months after completing her degree. Since then, she has travelled to Canada, Sri Lanka, Sicily, New York, LA, the Canary Islands, Spain and lots more of Greece, but her wanderlust was reined in when she met Max, a fluffy little Bolognese puppy desperate for a home. When she's not writing novels set in far-flung locations, Isabelle spends her time being the Book Reviews Editor at heat magazine and walking her beloved dog round the parks of north London.

You Me Everything (2017)
Catherine Isaac
"You broke my heart AND made it soar!"