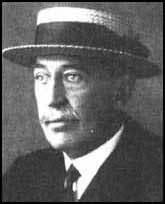 (1874 - 1945)
Born in London in 1874, Maurice Baring was a man of letters, a scion of a family long prominent in the financial ventures of the British Empire. The son of the 1st Baron Revelstoke (a director of the Bank of England and a senior partner at Baring Bros.) he was educated at Eton and at Cambridge, and joined the diplomatic service in 1898. In 1904 he became a journalist and reported the Russo-Japanese War in Manchuria; later he was a correspondent in Russia and Constantinople. He is credited with having discovered Chekov's work in Moscow and helping to introduce it to the West. Baring is remembered as a versatile, prolific and highly successful writer, who produced articles, plays, biographies, criticism, poetry, translations, stories and novels. He is regarded as a representative of the social culture that flourished in England before World War I, his work highly regarded to this day for the acute intimate portraits of the time.
Novels
Passing by (1921)
Cat's Cradle (1925)
Daphne Adeane (1927)
Tinker's Leave (1927)
The Coat Without Seam (1929)
In the End Is My Beginning (1931)
C (1934)

Visitors to this page also looked at these authors
Vincent O'Sullivan