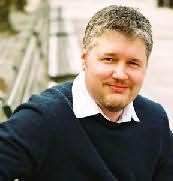 (b.1969)
New York Times bestselling author Michael Buckley was born in Akron, Ohio. He tried his hand as a stand-up comic and lead singer for a punk rock back before attending Ohio University. After graduating with honors he moved to New York City to be an intern on the Late Show with David Letterman which led to stints developing programming for Discovery Networks, MTV, MTV Animation and Klasky Csupo (producers of Nickelodeons Rugrats). Today he lives in Brooklyn, New York with his wife, Alison, and their son Finn.

The Familiars (2010)
(Familiars, book 1)
Adam Jay Epstein and Andrew Jacobson
"The Familiars combines the magic of Harry Potter and the adventure of Warriors into an enchanting story readers will love. Whether furry, flippered or feathered you'll be taking a closer look at your family pet."