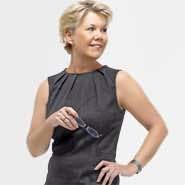 (1956 - 2016)
Sally Brampton began her career on Vogue before moving to the Observer as fashion editor. She launched Elle in the UK, which she edited for five years, leaving to write full time. She published several novels, a television documentary and a screenplay, and wrote extensively for all major national newspapers and magazines.
Novels
Good Grief (1992)
Lovesick (1995)
Concerning Lily (1998)
Love, Always (2000)