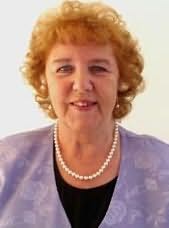 aka Sally Blake, Jean Innes, Rachel Moore, Jodi Nicol, Rowena Summers
Jean Innes was born on 8 February 1932 in London, England, but she have lived in the West Country almost all her life. She married with Geoff Saunders, her childhood sweetheart, and they have three grown up children. She lived in Weston-Super-Mare, Somerset, where she wrote full time. She passed away on 3 August 2011, after contracting an illness, after being rushed to Weston General Hospital.

Jean began her career as a magazine writer and had published around 600 short stories. She start to published gothic romance novels under her married name Jean Saunders and her maiden name Jean Innes in the 1970s. In 1980s, she created, to wrote historical romances, two pseudonyms, her most popular, Rowena Summers and Sally Blake. In 1991 her novel, "The Bannister Girls," was shortlisted for the Romantic Novel of Year award. In 2004, she began to used the penname Rachel Moore.

Omnibus
A Bride's Desire (1994) (with Karen A Bale, Christine Dorsey (as by Jean Innes) and Sonya T Pelton)
Rowena Summers Omnibus (2000) (as by Rowena Summers)