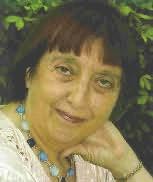 aka Laura Hart, Vesta Hathaway, Donna Hunt, Sally James, Bridget Thorn, Livvy West
Marina Oliver has published more than fifty novels under her name and her pseudonyms, plus half a dozen non-fiction books. Her novelsare historical romances as well as twentieth-century sagas, contemporary romances and crime. She has edited her own quarterly magazine, and also manybooks and newsletters, mainly for educational organisations.

Marina was elected the sixteenth Chairman (1992-1993) of the RomanticNovelists' Association, edited its Newsletter for 3 years, and now has beenelected a Vice-President and runs the R.N.A. New Writer's Scheme. She readsfor and judges short story competitions, reviews historical novels, and hasdone appraisals for (among others) a prestigious Regional Arts board.

Turning Point (2005)
Bowering Sivers
"This book is a joy. It bubbles with humour on every page."