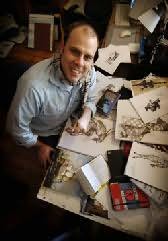 Australia (b.1972)
D.M. CORNISH was born in time to see the first Star Wars movie. He was five. It made him realize that worlds beyond his own were possible, and he failed to eat his popcorn. Experiences with C S Lewis, and later J R R Tolkien, completely convinced him that other worlds existed, and that writers had a key to these worlds. But words were not yet his earliest tools for storytelling. Drawings were.

He spent most of his childhood drawing, as well as most of his teenage and adult years as well. And by age eleven he had made his first book, called "Attack from Mars.He studied illustration at the University of South Australia, where he began to compile a series of notebooks, beginning with #1 in 1993.It was not until 2003 that a chance encounter with a children's publisher gave him an opportunity to develop these ideas further. Learning of his journals, she bullied him into writing a story from his world. Cornish was sent away with the task of delivering 1,000 words the following week and each week thereafter. Abandoning all other paid work, he spent the next two years propped up with one small advance after the other as his publisher tried desperately to keep him from eating his furniture.