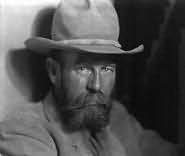 (1873 - 1940)
Dane Coolidge was born in Natick, Massachusetts, on March 24, 1873. He was brought up in Riverside, California, and received his higher education at Stanford and Harvard Universities. From 1895 to 1900 he was a field collector of mammals, birds and reptiles in Nevada, Arizona and Southern California for a number of institutions, including Stanford University, the British Museum, U. S. National Zoological Park, and the U. S. National Museum in Italy and France. On July 30, 1906, he married Nary Roberts, and the couple eventually made their home in Berkeley, California. In 1910, his first novel, Hidden Water, was published, and this was followed by a long succession of novels and some non-fiction, with California and Southwest locales. He and his wife collaborated on two books, The Navajo Indians (1930) and The Last of the Seris (1939). In addition, Coolidge contributed short stories and illustrated articles to several magazines, including Youth's Companion, Sunset, Redbook, Harper's and Country Life in America. Mr. Coolidge died in 1940; Mrs. Coolidge, in 1945.