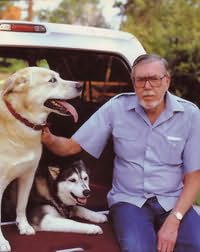 aka William Mason
In brief, William W. Johnstone was born in Southern Missouri, the youngest of four children. His father was a minister and his mother was a schoolteacher. He quit school when he was fifteen and joined a carnival after getting kicked out of the FFL (for being underage), he returned to finish high school in 1957. Bill then worked as a deputy sheriff, did a hitch in the army, returned home and began a career in radio broadcasting, where he worked for sixteen years.

Mr. Johnstone started writing in 1970, but wasn't published until late 1979. He has written close to two hundred books including the best-selling Ashes series and the Mountain Man series. He began writing full-time in the early 1980s and hasn't stopped since. His first published book was THE DEVIL'S KISS and his favorite is THE LAST OF THE DOG TEAM.