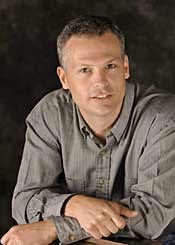 (1969 - 2017)
Jeff Carlson was born on the day of the first manned moon landing and narrowly escaped being named Apollo, Armstrong, or Rocket. His father worked for NASA-Ames at the time, and his granddad on his mother's side was a science fiction fan whose library included autographed copies of Isaac Asimov's Foundation trilogy.

Both men were strong, early influences-and in the high tech 21st Century, it's easy to stand with one foot in reality and the other in sci-fi. Jeff's writing alternates between mainstream and genre fiction.

Jeff is the international bestselling author of Plague Year, Plague War (a finalist for the 2008 Philip K Dick Award), and Plague Zone.

To date, his writing has sold in fourteen languages.His short stories and nonfiction articles have appeared in leading venues such as Boys' Life, Asimov's Science Fiction, and the Fast Forward 2 anthology.

He is currently at work on a new stand-alone thriller.