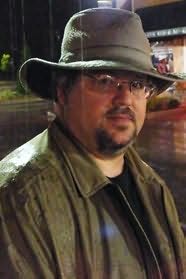 Jeff Crook and his lovely wife, Lady Jessica, live in the Quinn family home among Jeff's ancestors -- not in the Native American or even the John-Boy Walton sense, but in the Stephen King sense. As their niece Nickie said, "Those stairs are spooky!" There, Jeff grows tomatoes and grass (more grass than tomatoes), sometimes he works, and he writes the rest of the time, neglecting most everything else, except the cat that must be fed from time to time.

Jeff's first Dragonlance novel, The Rose and the Skull, hit the shelves in March 1999. He also worked on a second Dragonlance novel for the Crossroads series. One of his stories was also included in the 2000 Dragonlance anthology, Rebels and Tyrants. His story, "The Fractal," appeared in Relics and Omens, poetry in "The Final Word," and five AD&D adventures in Dungeon Magazine. He is currently the editor of Campaigns, the newsletter for the Southern Realms region of the RPGA.

When not writing or working or gardening or feeding the kitty, Jeff occasionally likes to mingle with humanity. He enjoys his food a bit too much, and wine is an expensive hobby he could probably do without, except life wouldn't be worth living. And when everything is quiet and the house is dark, the cat is asleep and the computer is turned off, Jeff lies in bed listening to things go bump in the night. He tries to turn off his brain so he can go to sleep, but it doesn't always work.

Novels
Sinbad and the Sword of the Prophet (2016)

Series contributed to
Dragonlance : Bridges of Time
4. The Rose and the Skull (1999)