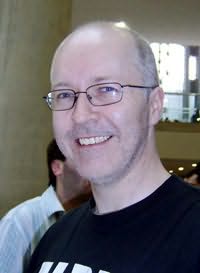 aka Jaye Carroll
Michael Carroll (born 21st of March 1966) is an Irish writer of novels and short stories for adults and children. He is best knows for his series of superhero novels The New Heroes and his his romantic fiction under the name Jaye Carroll.

After leaving school at sixteen, he worked as a postman. Following a knee injury, he moved into computer programming in 1985 at the age of nineteen. In 1990 he met his future wife, Leonia Mooney, at the National Irish Science Fiction Convention, Octocon. He was a co-founder of the small-press magazine PFJ, first published in October 1991. Having attended the Irish Science Fiction Association writing classes held by Irish author Michael Scott, he decided to set his mind to becoming a full time writer, and finally did so in 1999.

Series contributed to
Other World
Moonlight (1994)

Lake Life (2020)
David James Poissant
"David James Poissant’s first novel is a model of how to render the souls of his many equally delineated and dramatized characters. Told in stirring language, it is the complex story of contemporary Americans, each dealing with a brand of loss: of children, of youth, of self-control, and of destiny. Here is a book that is heartbreaking and true, lilting and swooping, dark and light, wry and touching."
Visitors to this page also looked at these authors
Orson Scott Card
Eoin Colfer
Kiera Cass
Meg Cabot
Elizabeth Bowen
Ally Carter
Patrick Carman
Kristin Cashore
W Bruce Cameron
Vi Carter
David Callinan
Cassandra Clare
Joelle Charbonneau
Michael Buckley
Emma Clayton
P C Cast