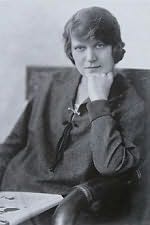 (1890 - 1969)
RICHMAL CROMPTON Lamburn, the daughter of a schoolteacher-curate, went to a Derbyshire boarding school, to which she returned as a teacher in 1914 after having read classics at Royal Holloway College. She then moved to Kent to live near her married sister and was a much loved classics mistress at Bromley High School. She published her first short story in 1918 (using her mother's maiden name); after polio left her lame she became a writer full time. The first of the popular William books appeared in 1922. For the next 45 years she was always at work on two books simultaneously, one for children (generally a William book) and one for adults. In Richmal Crompton's lifetime thirty collections of William stories sold over eight million copies; but she once hinted that her 'Frankenstein's Monster' had ambushed recognition for her forty serious novels, of which FAMILY ROUNDABOUT (1948) is perhaps the best.