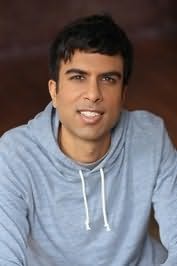 Soman Chainani's first novel, The School for Good and Evil, debuted on the New York Times Bestseller List, has been on ABA's National Indie Bestseller List for 11 weeks, has been translated into languages across six continents, and will soon be a major motion picture from Universal Studios.

As a writer and film director, Soman's films have played at over 150 film festivals around the world, winning more than 30 jury and audience prizes, and his writing awards include honors from Big Bear Lake, New Draft, the CAPE Foundation, the Sun Valley Writers Fellowship, and the coveted Shasha Grant, awarded by a jury of international film executives.

When he's not telling stories or teaching in New York City, Soman is a die-hard tennis player who never lost a first-round match for ten years . . . until he started writing The School for Good and Evil. Now he loses all the time.

Last Day on Mars (2017)
(Chronicle of the Dark Star, book 1)
Kevin Emerson
"Last Day on Mars is thrillingly ambitious and imaginative. Like a lovechild of Gravity and The Martian, it's a rousing space opera for any age, meticulously researched and relentlessly paced, that balances action, science, humor, and most importantly, two compelling main characters in Liam and Phoebe. A fantastic start to an epic new series."

Nightbooks (2018)
J A White
"Nightbooks is another winner from J.A. White. A creepy, thrilling reinvention of Hansel and Gretel that leaves us both frightened for our hero and also impressed by his resourcefulness. J.A. White is a fantastic writer and spins a dark fairy tale that will keep kids up all night."

The DarkDeep (2018)
(DarkDeep, book 1)
Ally Condie and Brendan Reichs
"The stakes are huge, the action high-throttle, but what readers will remember most is its big, emotional heart. . . A truly spectacular adventure."

The Best at It (2019)
Maulik Pancholy
"Exuberant... Every middle schooler will find themselves in this book."

The Dragon Egg Princess (2020)
Ellen Oh
"Filled with strange terrains, creatures, and magic, this is an enthralling read!."

Cinders and Sparrows (2020)
Stefan Bachmann
"Stefan Bachmann is a terrific, ambitious writer . . . Magic and mystery tied up with real stakes—readers won’t be able to turn the pages fast enough."

Escaping Ordinary (2020)
(Talespinners , book 2)
Scott Reintgen
"A love letter to stories and the characters who make them happen."

Kingston and the Magician's Lost and Found (2021)
(Kingston, book 1)
Theo Gangi and Rucker Moses
"Inventive, authentic, and razor-sharp, Kingston and the Magician’s Lost and Found is at once an exhilarating fantasy and a moving tale of how far a father and son are willing to go for one another. Rucker Moses and Theo Gangi put aside familiar tropes to build something new, an underground New York City, filled with magic and secrets, that challenges readers to solve its mysteries alongside its main character. As for Kingston, we’ve never seen anything like him—a young Black superhero determined to put the magic back in Brooklyn. He’s sharp, feisty, funny, and always a step ahead. This is a special book, the kind that you fall in love with, because beneath the fun and twists, shining through is Kingston’s big, bold heart."
Visitors to this page also looked at these authors
Ally Carter
Jen Calonita
Eoin Colfer
Rick Riordan
Chris Colfer
Suzanne Collins
Julian Michael Carver
Holly Black
Jeff Kinney
P C Cast
Melissa De La Cruz
Cassandra Clare
Shannon Hale
W Bruce Cameron
Kiera Cass
Leigh Bardugo