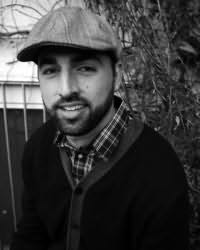 Scott Reintgen grew up in North Carolina, and took full advantage of the fact that he lived on the same street as fourteen of his cousins. It could be a little crowded, but he threw a few elbows and carved out a space for himself as the family storyteller. He enjoyed the role so much that he decided to spend most of college and graduate school investing in the world of literature. This led to a career teaching English and Creative Writing in the great state of North Carolina, where he currently lives with his wife and family. To his great delight, the demand for stories and storytellers is alive and well. As such, he can often be found at local coffee shops laboring over stories that he hopes his family, and fans, will love.

The Last Sun (2018)
(Tarot Sequence, book 1)
K D Edwards
"Absolutely sensational. Edwards takes all the familiar pawns of urban fantasy and makes royalty of them in his debut. We’re invited into an alternative, historical world of staggering breadth and realization. The central characters, Rune and Brand, combine the loyalty of Frodo and Samwise with the sacrilege of a pairing like Tyrion and Bronn. When thrown in beside fascinating magical systems, breathtaking prose, and a relentless plot—this is the tale of Atlantean magic we didn’t know we wanted."