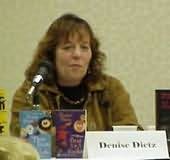 Wife of Gordon Aalborg
When Denise [Deni] Dietz was in the third grade, she wrote her first story, The Pencil Who Grew Up to Be a Stub. Although the assignment was to write a one-page story, using an ink pen, Deni wrote a five-page story, first-person...and she used a pencil (the narrator of her story). Whereupon, she received a failing grade for not following orders. Like Hitchcock the Dog in Footprints in the Butter, Deni doesn't follow orders unless they make sense.

Years later, after Deni had enjoyed a short-lived singing career and acting career, she sat at her typewriter, flexed her fingers, and pounded out her first culinary mystery: Throw Darts at a Cheesecake, inspired by her part-time job as a Weight Watchers lecturer. In Cheesecake diet club members are getting killed off at goal weight and eating as if their lives depended on it. Switching to a computer, Deni hit the bestseller list with Footprints in the Butter - an Ingrid Beaumont Mystery co-starring Hitchcock the Dog. She followed that success with her stand-alone, Fifty Cents for Your Soul, her "reluctant witch mystery," Eye of Newt and three more diet club mysteries.

Married to Aussie/Canadian author, Gordon Aalborg (AKA Victoria Gordon), whom she met on-line through a writers loop, Deni moved to Vancouver Island, where she is owned by a chocolate Lab named Magic.
Series
Ellie Bernstein / Lt. Peter Miller
1. Throw Darts at a Cheesecake (1992)
2. Beat Up a Cookie (1994)
3. Chain a Lamb Chop to the Bed (2005)
4. Strangle a Loaf of Italian Bread (2009)