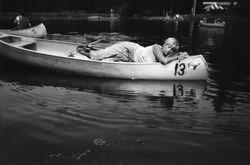 Emily m. danforth's debut novel, The Miseducation Of Cameron Post (HarperCollins 2012), received starred reviews from Kirkus, Booklist, Publishers Weekly, and School Library Journal, and was praised in the LA Times, The Boston Globe, The Seattle Stranger, USA Today, Entertainment Weekly, and NPR, whose reviewer called it "a skillfully and beautifully written story that does what the best books do: It shows us ourselves in the lives of others." emily has an MFA in Fiction from the University of Montana and a Ph.D in English-Creative Writing from the University of Nebraska-Lincoln.

Her short fiction has won the International Queer Writing Award from the U.K.'s Chroma Magazine, and the George Garret Award from Willow Springs. emily's nonfiction has been featured on NPR's All Things Considered and in The Huffington Post. She teaches creative writing and literature courses at Rhode Island College in Providence and is also 1/3 of the editorial/publishing staff of The Cupboard, a quarterly prose chapbook.

emily was born and raised in Miles City, Montana, a town best known for its Bucking Horse Sale-which was once listed in the Guinness Book of World Records for hosting the most intoxicated people, per capita, of any US event. She obsessively collects erasers, large-letter linen postcards from the 1940s, snow-globes, and neologisms. (She has an iced-coffee addiction, too.)