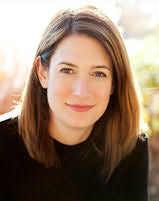 (b.1971)
Gillian Flynn is an American author and television critic for Entertainment Weekly. She has so far written three novels, Sharp Objects, for which she won the 2007 Ian Fleming Steel Dagger for the best thriller; Dark Places; and her best-selling third novel Gone Girl.

Her book has received wide praise, including from authors such as Stephen King. The dark plot revolves around a serial killer in a Missouri town, and the reporter who has returned from Chicago to cover the event. Themes include dysfunctional families,violence and self-harm.

In 2007 the novel was shortlisted for the Mystery Writers of America Edgar for Best First Novel by an American Writer, Crime Writers' Association Duncan Lawrie, CWA New Blood and Ian Fleming Steel Daggers, winning in the last two categories.

Flynn, who lives in Chicago, grew up in Kansas City, Missouri. She graduated at the University of Kansas, and qualified for a Master's degree from Northwestern University.

The Next Time You See Me (2013)
Holly Goddard Jones
"[A]n astoundingly good novel... Jones writes with authority and a deep generosity... The result is simply mesmerizing."

Rage Against the Dying (2013)
(Brigid Quinn, book 1)
Becky Masterman
"Wow! An absolute pleasure. Chilling, smart, funny, and what a voice she has."

Cop Town (2014)
Karin Slaughter
"Karin Slaughter is simply one of the best thriller writers working today, and Cop Town shows the author at the top of her game – relentless pacing, complex characters, and gritty realism, all set against the backdrop of a city on the edge. Slaughter’s eye for detail and truth is unmatched . . . I’d follow her anywhere."

The Fever (2014)
Megan Abbott
"With The Fever, Megan Abbott has created a mesmerizing, modern portrait of teenage life today: Brutal crushes, competing allegiances and first-bloom sensuality, all magnified by the rush and crush of technology. The Fever holds true to its title: It's dark, disturbing, strangely beautiful and utterly unshakeable."

Slade House (2015)
David Mitchell
"Plants died, milk curdled, and my children went slightly feral as I succumbed to the creepy magic of David Mitchell's Slade House. It's a wildly inventive, chilling, and – for all its other-worldliness – wonderfully human haunted house story. I plan to return to its clutches quite often."

Where They Found Her (2015)
Kimberly McCreight
"McCreight creates a world that pulls us in completely and genuinely, with characters that can enrage, amuse, and fill us with empathy. It’s a thrilling novel."

Don't Let Go (2017)
Harlan Coben
"Simply one of the all-time greats—pick up any one of his thrillers and you’ll find a riveting, twisty, surprising story with a big, beating heart at its core."

Our Kind of Cruelty (2018)
Araminta Hall
"This is simply one of the nastiest and most disturbing thrillers I've read in years. In short: I loved it, right down to the utterly chilling final line."

Beneath the Attic (2019)
(Dollanganger , book 6)
V C Andrews
"I will probably be clutching Flowers in the Attic in my gnarled hands on my deathbed."

My Dark Vanessa (2020)
Kate Elizabeth Russell
"A brilliant and stunning debut, My Dark Vanessa is utterly truth-rattling, humane in its clarity and chilling in its resonance. An absolute must read."