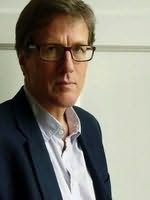 (b.1951)
Mark Douglas-Home is a journalist turned author. The Sea Detective, his first novel, was published in 2011 to critical praise. It introduced a new kind of investigator to crime fiction - an oceanographer called Cal McGill who tracks floating objects, including dead bodies, at sea. A sequel, The Woman Who Walked Into The Sea, was published in April 2013 ('a classic whodunit,' according to The Scotsman's respected reviewer Allan Massie). Before writing books, Mark was editor of Scotland's leading daily newspaper, The Herald, for five years and editor of The Sunday Times Scotland. He has also held senior roles with The Scotsman and Scotland on Sunday.
When he was Scottish correspondent of The Independent he reported on both the Lockerbie and Piper Alpha disasters. His career in journalism began as a student in South Africa where he edited the newspaper at the University of the Witwatersrand, Johannesburg. After the apartheid government banned a number of editions, he was deported from the country. He is married with two children and lives in Edinburgh.