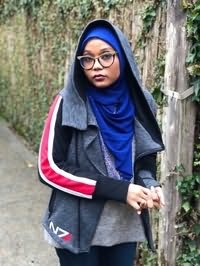 Somaiya Daud was born in a Midwestern city, and spent a large part of her childhood and adolescence moving around. Like most writers, she started when she was young and never really stopped. Her love of all things books propelled her to get a degree in English literature (specializing in the medieval and early modern), and while she worked on her Master’s degree she doubled as a bookseller at Politics and Prose in their children’s department. Determined to remain in school for as long as possible, she packed her bags in 2014 and moved the west coast to pursue a doctoral degree in English literature. Now she’s preparing to write a dissertation on Victorians, rocks, race, and the environment. Mirage is her debut, and is due from Flatiron Books in 8/28/2018.

The Project (2021)
Courtney Summers
"Masterful and devastating. The Project welcomes you into its world with the warmth of a minister and peels back the psychology of its characters--joiners and questioners alike--with a precision only Courtney Summers is capable of. Trust me: there is no flaw in The Project."
Visitors to this page also looked at these authors
James Dashner
Melissa De La Cruz
Suzanne Collins
Kiersten White
Julie C Dao
Tochi Onyebuchi
Orson Scott Card
Cory Doctorow
David Baldacci
Cassandra Clare
Sarah Rees Brennan
Ally Condie
Lauren DeStefano
Kiera Cass
Susan Dennard
Rin Chupeco