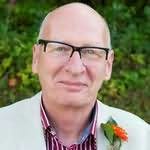 (Peter F Ford)
Having spent most of his life trying to be what everyone else wanted him to be, P.F. Ford was a late starter when it came to writing. He had tried writing a novel many years ago (before the advent of self-publishing), only to be turned down by every publisher he approached. It was very much a case of being told by those around him, now you know you can't write, so get back to work!

Even at an early age, Peter felt very much like the proverbial square peg being forced into a round hole. This resulted in the creation of a Grammar School drop-out who then drifted through a succession of unfulfilling jobs, finally ending up in a totally unsuitable role which eventually sapped his energy and self-confidence. There followed a brief foray into self-employment (not a good idea for someone lacking in self-confidence!) which ended in total financial melt-down, a mountain of debt, and a lapse into depression.

Faced with the fact that hed never be happy as he was, Peter finally decided he had no intention of continuing that way, and things just had to change. This was achieved by closing the door on his old life and starting over. Fast forward a few years and you find a man transformed, his newly found positive attitude enabling him to find new partner (now wife), Mary, who shares his belief that dreamers should be encouraged and not denied.