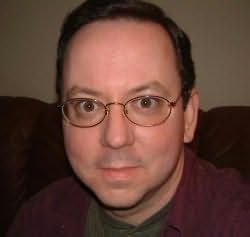 Dave Gross is the author of the Radovan and the Count novels for Pathfinder Tales. The fifth volume, LORD OF RUNES, arrives from Tor in June 2015.

Dave's previous Pathfinder Tales include BLACK WOLF, MASTER OF DEVILS, QUEEN OF THORNS, and KING OF CHAOS. For Privateer Press's Iron Kingdoms, Dave wrote THE DEVIL'S PAY and DARK CONVERGENCE. For the Forgotten Realms he wrote BLACK WOLF and LORD OF STORMWEATHER. His short fiction has also appeared in TALES OF THE FAR WEST, SHOTGUNS V. CTHULHU, THE LION AND THE AARDVARK, SHATTERED SHIELDS, and other anthologies.

In a past life, Dave edited magazines ranging from DRAGON to STAR WARS INSIDER and AMAZING STORIES. He lives with his wife and their small pack of animals in Alberta, Canada.