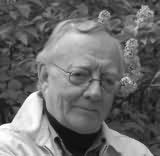 (b.1937)
In his early teens, Robert Goldsborough began reading Rex Stout's Nero Wolfe mysteries. This started when he complained to his mother one summer day thathe had "nothing to do." An avid reader of the Wolfe stories, she gave him a magazine serialization, and he became hooked on the adventures of thecorpulent Nero and his irreverent sidekick, Archie Goodwin.

Through his school years and beyond, Goldsborough devoured virtually all of the 70-plus Wolfe mysteries. It was during his tenure with the Chicago Tribune that the paper printed the obituary of Rex Stout. On reading it, his mother lamented that "Now there won't be any more Nero Wolfe stories."

"There might be one more," Goldsborough mused, and began writing an original Wolfe novel for his mother. As a bound typescript, this story, "Murder in EMinor," became a Christmas present to her in 1978. For years, that's all the story was-a typescript. But in the mid-'80s, Goldsborough received permission from the Stout estate to publish "E Minor," which appeared as a Bantam hardcover, then paperback. Six more Wolfe novels followed, to favorable reviews.

But as much as he enjoyed writing these books, Goldsborough longed to create his own characters, which he has done in "Three Strikes You're Dead," set in the gang-ridden Chicago of the late 1930s and narrated by a Tribune police reporter.

Goldsborough, a lifelong Chicagoan who has logged 45 years as a writer and editor with the Tribune and with marketing journal Advertising Age, says it was "Probably inevitable that I would end up using a newspaperman as my protagonist."