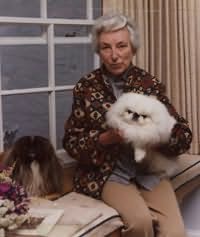 (1907 - 1998)
Margaret Rumer Godden, OBE, was an English author of over 60 books, under the name of Rumer Godden.
Born in Sussex, England, Godden grew up with her three sisters in Narayanganj, then part of colonial India. She returned to the United Kingdom with her sisters in her early 20s, training as a dance teacher. She went to Calcutta in 1930 to start a dance school for English and Indian children. Godden ran the school for 20 years with the help of her sister Nancy. During this time she published her first best-seller, Black Narcissus (1939).

Following an unhappy marriage of 8 years, she moved with her two daughters to Kashmir. Remarrying again in 1949, she returned to the United Kingdom to concentrate on writing.

Later on, Godden converted to Roman Catholicism and a number of her books began to deal with the subject of women in religious communities. In books such as Five for Sorrow, Ten for Joy and In This House of Brede she acutely examined the balance between the mystical aspects of religion and the submission of the individual to the spiritual discipline. She retired to Moniaive in Dumfriesshire in her 70s. She was appointed OBE in 1993. Rumer Godden died at the age of 90 on November 8, 1998. Several of her works were co-written by her sister, Jon Godden, who wrote several novels on her own.

Godden evokes the atmosphere of India through all the senses: her writing is vivid with detail of smells, textures, light, flowers, noises and tactile experiences. Her books for children, especially her several doll stories, convincingly convey the secret thoughts and aspirations of childhood.