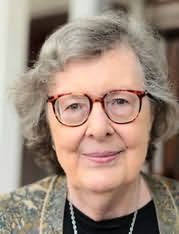 (b.1933)
Mother of Adam Lively
Penelope Lively is the author of many prize-winning novels and short-story collections for both adults and children. She has twice been shortlisted for the Booker Prize: once in 1977 for her first novel, The Road to Lichfield, and again in 1984 for According to Mark. She later won the 1987 Booker Prize for her highly acclaimed novel Moon Tiger.

She is a popular writer for children and has won both the Carnegie Medal and the Whitbread Award. She was appointed CBE in the 2001 New Year's Honours List, and DBE in 2012. Penelope Lively lives in London. She was married to Jack Lively, who died in 1998.

The Maid of Buttermere (1987)
Melvyn Bragg
"A vivid and erudite tour de force."

An Experiment in Love (1995)
Hilary Mantel
"It is vivid. It is moving and entertaining in equal measures. Buy it and find out for yourself."

Blame Hitler (1997)
Julian Rathbone
"A shrewd and intricate narrative by a skilful novelist."

Larry's Party (1997)
Carol Shields
"A brilliant fictional reflection on what it may be like to be a man in the late twentieth century."

Those Who Save Us (2004)
Jenna Blum
"I was much impressed. A powerful evocation of terrible events, moving and persuasive. A remarkable first novel, with memorable characters."

A Single Thread (2019)
Tracy Chevalier
"I enjoyed A Single Thread enormously. Tracy Chevalier wonderfully evokes the social climate of the nineteen thirties – this is the intriguing story of a young woman facing the conventions and prejudices of the day, told with a wealth of detail and narrative intensity."