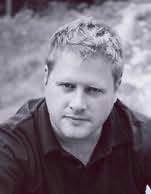 Thomas Christopher Greene was born and raised in Worcester, Massachusetts, the sixth of seven children born to Richard and Dolores Greene. His father was a college professor (who later became a college president) and his mother taught kindergarten. He was educated at Worcester public schools and then Suffield Academy. He earned his BA in English and Creative Writing from Hobart College in Geneva, New York. He also earned a MFA in Writing from Vermont College in Montpelier, Vermont.

Tom has worked in a staple factory; as an oyster shucker; a speechwriter and spokesperson for a presidential campaign; the director of public affairs for two colleges; and as a professor of writing and literature.

He lives outside Montpelier, Vermont in an eighteenth century farmhouse with his wife, Tia, their seventeen-month-old daughter, Sarah, and various animals.

Castle of Water (2017)
Dane Huckelbridge
"Brilliant, clever, riveting - pick your adjective, they all apply. But do pick up Castle of Water, just be careful when you pick it up. For Huckelbridge has spun a yarn that is sure to cost you sleep while you race to the remarkable end. It's that good."

Winter Sisters (2018)
Robin Oliveira
"A true tour de force, Winter Sisters is the best period thriller I’ve read since The Alienist. Robin Oliveira is a novelist working at the height of her powers. Beautifully written, compelling, sensual and cinematic, I couldn’t put it down."