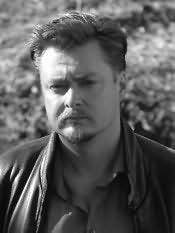 aka Andrew Hart
British born writer A.J. Hartley got his first taste for archaeology touring sites in Greece and Rome as a child with his family. As an English major at Manchester University he took extra classes in Eqyptology and got a job working on a Bronze Age site just outside Jerusalem. Since then, life has taken him to many places around the world, and though he always leaned more towards the literary than to the strictly historical, his fascination with the past has continued unabated.

He has an M.A. and Ph.D. in English literature from Boston University and is currently the Distinguished Professor of Shakespeare in the Department of Theatre and Dance at the University of North Carolina at Charlotte. As well as being a novelist and academic, he is a screenwriter, theatre director and dramaturg (and has a book explaining what that is). He has more hobbies than is good for anyone, and treats ordinary things like sport and food and beer with a reverence which borders on mania. He is married with a son, and lives in Charlotte.

The Blood King (2008)
(Chronicles of the Necromancer, book 2)
Gail Z Martin
"A rich, evocative story with vivid, believable characters moving through a beautifully realized world with all the quirks, depths and levels of a real place. A terrific read!"

The Shepherd (2011)
(Shepherd , book 1)
Ethan Cross
"In The Shepherd, Ethan Cross has penned a taut, violent and relentless nightmare designed to prey on a reader's darkest fears. Not for the faint of heart!"