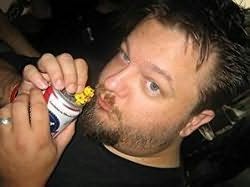 John G. Hartness is a teller of tales, a righter of wrong, defender of ladies’ virtues, and some people call him Maurice, for he speaks of the pompatus of love. He is also the best-selling author of the EPIC-Award-winning series The Black Knight Chronicles from Bell Bridge Books, a comedic urban fantasy series that answers the eternal question “Why aren’t there more fat vampires?”

A graduate of Winthrop University, John lives in Charlotte with his wife Suzy and a very demanding cat. In other lives, he has been an actor, lighting designer, theatre consultant, salesman, electronics technician, and arts administrator. He put his theatre performance degree to good use in the early 2000s, when he served as Managing Director of the Off-Tryon Theatre Company and President of both the Metrolina Theatre Association and the North Carolina Theatre Conference.

Bubba the Monster Hunter Omnibus
1. Bump in the Night (2012)