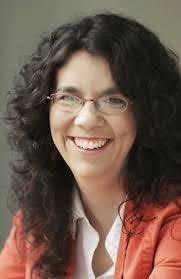 (b.1972)
Rachel Hartman was born in Kentucky, and has lived in Chicago, Philadelphia and St. Louis, as well as in England and Japan. She has a B.A. in Comparative Literature, although she insists it should have been a B.S. because her undergraduate thesis was called Paradox and Parody in Don Quixote and the Satires of Lucian. She eschewed graduate school in favour of drawing comic books. She now lives in Vancouver with her family, their whippet, a talking frog and a salamander.

Tempests and Slaughter (2018)
(Numair Chronicles, book 1)
Tamora Pierce
"Tamora Pierce is a trailblazer for so many fantasy writers, hacking through the old tropes with her narrative machete and showing us that girl-centered adventures are not just possible but amazing."

The Candle and the Flame (2019)
Nafiza Azad
"Fiery magic, sizzling romance, and a city so achingly hopeful and real that you can almost taste it on every page. I can't wait to return to Noor!."

Fireborne (2019)
(Aurelian Cycle, book 1)
Rosaria Munda
"Fireborne is everything I want in fantasy."