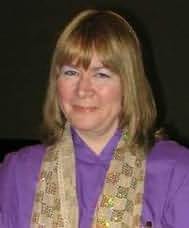 (b.1965)
Elizabeth Haydon is a fantasy author, whose 1999 debut, Rhapsody: Child of Blood, garnered comparisons with Goodkind, Jordan, and even Tolkien. She has written two fantasy series set within the same universe, The fantasy/romance/whodunit fusion called The Symphony of Ages and the young adult series The Lost Journals of Ven Polypheme.

An herbalist, harpist, and madrigal singer, Elizabeth Haydon also enjoys anthropology and folklore. She lives on the East Coast of the United States.

Medalon (2000)
(Demon Child, book 1)
Jennifer Fallon
"Medalon in an intriguing, intelligent and fun read with a refreshing take on female characters so often not seen in the genre."

The Briar King (2002)
(Kingdoms of Thorn and Bone, book 1)
Greg Keyes
"Starts off with a bang, spinning a snare of terse imagery and compelling characters that grips tightly and never lets up . . . A graceful, artful tale from a master storyteller."

Stolen Magic (2005)
(Guardian, book 2)
Mary Jo Putney
"M. J. Putney's writing has always been magical; now that she has turned her hand to the telling of a fantasy tale, it sparkles on the page. Stolen Magic has to be one of the most delightful reads of the year, a witty, finely crafted tale that enchants from beginning to end. As always, Putney’s intelligent wordsmithery, scholarship, eye for detail, and ability to bring to life irresistible characters add up to enjoyment on every page. Fast-moving and fun!"

The Darkling Fields of Arvon (2010)
(Legacy of the Stone Harp, book 2)
James G Anderson and Mark Sebanc
"A genuinely thrilling beginning to what is sure to be a resounding epic... a wonderful read..."

Weave a Circle Round (2017)
Kari Maaren
"Kari Maaren's Weave a Circle Round is a delightful debut sure to enchant young adults and older ones who appreciate their literature. It rings many of the same chimes as The Phantom Tollbooth and A Wrinkle in Time, with a few notes charmingly reminiscent of Monty Python, while singing its own intriguing song. Maaren demonstrates impressive respect for both her characters and her readers, weaving challenging concepts (Kublai Khan?!] into accessible, fun dialogue and narration. I found myself feeling the same excitement I first experienced upon reading time-travel tales long ago, which is a magical thing indeed."
Visitors to this page also looked at these authors
Robin Hobb
Kevin Hearne
L E Modesitt Jr
Robert Heinlein
Barb Hendee
Terry Goodkind
Lian Hearn
Kim Harrison
Terry Brooks
Tanya Huff
Mercedes Lackey
C J Cherryh
Anne McCaffrey
Andre Norton
Raymond E Feist
Robert Jordan