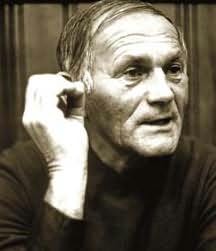 Czechoslovakia (1914 - 1997)
Bohumil Hrabal was a famous Czech writer. Hrabal received a Law degree from Prague's Charles University, and lived in the city from the late 1940s on.

He died when he fell from a window on the fifth floor of the Bulovka hospital in Prague where he was apparently trying to feed pigeons. It was noted that Hrabal lived on the fifth floor of his apartment building and that suicides by leaping from a fifth-floor window were mentioned in several of his books.
Novels
Dancing Lessons for the Advanced in Age (1964)
Closely Observed Trains (1965)
aka A Close Watch On the Trains
Cutting It Short (1970)
Too Loud a Solitude (1976)
The Little Town Where Time Stood Still (1978)
I Served the King of England (1983)
In-house Weddings (2007)
Vita Nuova (2010)
Gaps (2011)