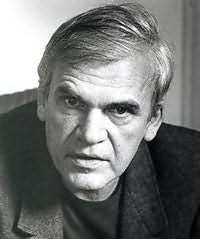 Czechoslovakia (b.1929)
Milan Kundera is a Czech and French writer of Czech origin who has lived in exile in France since 1975, where he became a naturalized citizen in 1981. He is best known as the author of The Unbearable Lightness of Being, The Book of Laughter and Forgetting, and The Joke.

Kundera has written in both Czech and French. He revises the French translations of all his books; these therefore are not considered translations but original works.

Due to censorship by the Communist government of Czechoslovakia, his books were banned from his native country, and that remained the case until the downfall of this government in the Velvet Revolution in 1989.
Novels
The Joke (1967)
Life Is Elsewhere (1970)
Farewell Waltz (1971)
The Farewell Party (1976)
The Book of Laughter and Forgetting (1980)
The Unbearable Lightness of Being (1984)
Immortality (1988)
Identity (1996)
Slowness (1996)
Masterpieces of Fiction (1997)
Ignorance (2000)
The Festival of Insignificance (2015)

Pornografia (1966)
Witold Gombrowicz
"One of the greatest novelists of our century."

I Served the King of England (1983)
Bohumil Hrabal
"Our very best writer today."

Texaco (1992)
Patrick Chamoiseau
"Chamoiseau is a writer who has the sophistication of the modern novelist, and it is from that position (as an heir of Joyce and Kafka) that he holds out his hand to the oral prehistory of literature."