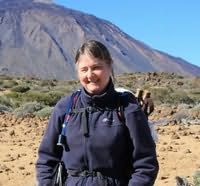 Heleyne Hammersley was born in South Yorkshire but has lived in Cumbria for the last twenty years where she sometimes teaches English and often walks on the fells.

She has been writing since junior school – her first work was a collection of poems called Give Them the Works when she was ten years old. The poems were carefully handwritten on plain paper and tied together with knitting yarn. Since then she's gone on to complete a number of creative writing courses with the Open University and she is a regular NaNoWriMo participant.

The idea for Forgotten came about while on an extended holiday in China and South-East Asia in 2001. Heleyne was on a bus in the mountains of Thailand and found herself wondering what would happen if she was suddenly thrown out of the emergency exit on a tight bend with no belongings or money. This rather disturbing thought eventually became a novel.