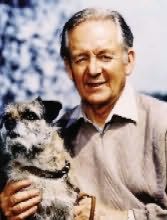 (1916 - 1995)
James Herriot is the pen name of James Alfred Wight, OBE, also known as Alf Wight (3 October 1916 - 23 February 1995), a British veterinary surgeon and writer. Wight is best known for his semi-autobiographical stories, often referred to collectively as All Creatures Great and Small, a title used in some editions and in film and television adaptations.

They Must Have Seen Me Coming (1978)
Louise Brindley
"This is a funny book, a warm and exciting book about ordinary people - the kind who exist in every town - old folk, who are so easily ignored and whose problems are submerged in the rush of life... touching and vastly entertaining."

Nop's Trials (1984)
Donald McCaig
"Poignant, authentic, beautiful... gripping as a thriller... Jack London's books made me cry as a boy and this nearly did the same to me now."

A Countryman's Lot (1991)
(Tales from the Dales)
Max Hardcastle
"A happy, satisfying and very funny book."