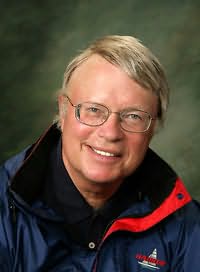 (b.1947)
Born in 1947 in Boston, Massachusetts, Bill Hammond received a B.A. degree in History and English from the University of North Carolina in 1970 and a M.B.A. degree from Babson College in 1985. He grew up in Manchester-by-the-sea, Massachusetts, where he developed a deep love for blue-water sailing, and has lived during his career in such places as Kansas City, Missouri; Alexandria, Virginia; and, for sixteen years, in Hingham, Massachusetts.

His thirty-year career in publishing has included work as a sales representative and as trade sales manager for Little, Brown & Company; as publisher of Hazelden Publishing and Education; as president of his own management consulting firm; and as a principal of a boutique investment bank located in Concord, Massachusetts.

A life-long student of history, and an avid sailor and reader of nautical fiction, he has combined his life’s passions in writing A Matter of Honor and subsequent titles in the Richard Cutler Naval Series. The Revolutionary War holds special fascination for him, for it was a war fought over ideals and principles -- not for territorial gain or monetary advantage, as is true in most wars -- and it was waged by a relative few. That these ragtag Continentals, the true heroes of the war, could prevail against the world’s mightiest military remains a testimony to the ages of Man’s courage, resilience, and desire for freedom.

A Matter of Honor is the author’s first novel. Previous writings include articles for various sailing magazines and a nonfiction business title, Twelve Step Wisdom at Work, published by Kogan Page (London) in 2000.

Bill Hammond lives with his wife Victoria and their three sons in Minneapolis. In addition to his day-time jobs as a publishing consultant and literary agent, Bill continues to write early every morning on sequels to A Matter of Honor, and to sail whenever possible on Lake Minnetonka and Lake Superior, and on Frenchman Bay in Maine where he maintains property and a Cape Dory sailboat.