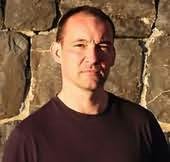 His first novel won a Society of Authors Betty Trask Award and saw the author nominated as the 2008 Hay Festival Scritture Giovani. The Dig a chapter of which was shortlisted for the 2013 Sunday Times EFG Private Bank Short Story Award won a Jerwood Fiction Uncovered Prize in 2014 and the Wales Book of the Year Fiction Prize 2015.

His work has been translated into several languages, and short stories have appeared in a number of anthologies and publications including Granta and New Welsh Review. His piece A Glass of Cold Water aired as part of BBC 4s State of the Nation series; he has also written variously for national newspapers.

Granta Books have recently republished his first two novels, and Cove, his next, will be published in Autumn 2016.

A Lonely Man (2021)
Chris Power
"A Lonely Man manages to set an unlikely premise alongside extraordinary events, while speaking honestly about the overwhelming, mundane things of fatherhood and being a friend and husband. A very deft literary act."

Under the Blue (2021)
Oana Aristide
"Under the Blue fuses the 'keep moving' urgency that drives apocalyptic road novels with a restrained love story and a science fiction that is at once unnerving, tender and credible."

Tides (2022)
Sara Freeman
"One of the most carefully written, brave, honest, devastating books I've read for a long time. There were lines in it so emotionally accurate and merciless they made me squint up my eyes. It's explosive. But the effect is the inside-your-body, barely-heard-properly percussive receipt of a detonation felt at a distance."
Visitors to this page also looked at these authors
Hanif Kureishi
Hari Kunzru
Vendela Vida
Charles L Grant
Nick Oldham
Ismail Kadare
Denis Johnson
Gene Kemp
Nora Roberts
Dick King-Smith
Jack Kerouac
Clive Cussler
J D Robb
Philip Kerr
Gardner F Fox
P D James